Not too long ago I tried Canele for the first time. I was in DC with my wife at the Little Red Fox. Inside the glass counter were these tiny interesting looking cakes that seemed burnt to me. I turned to my wife, “honey they are burnt!” They are supposed to be that way she said. I wanted to try one but they were $3 each! I passed that day, but came back another time my wife encouraged me to get one. I did, I don’t know if that was a bad thing or good thing now. I loved them, and have been on a quest to try and make a Canele at home. I didn’t realize at the time I was embarking on a rather complex endeavor. Canele are not easy to make, (not easy to make correctly) A good Canele will have a caramelized sugar crust, not too thick but not too thin. Inside they are cakey/custardy. Some of the interesting ingredients include Rum, and I have seen Grand Mariner.

There is no shortage of recipes for Canele. I can tell now from the photos if it’s a good recipe or not. One thing all recipes have in common is a resting period for the batter. Surprisingly, but commonly the batter is very liquidy, like crepe batter. However, the resting period varies from a few hours to 48 hours. Time and temperature also vary wildly. Some say bake at a constant temperature for a set period of time and some start off at a high temperature and lower after a period of time. The ingredients are fairly straight forward, flour, butter, sugar, vanilla egg, rum, beeswax (more on this below) and sometimes (salt, cornstarch, Grand Mariner, white oil)  Each recipe requires different amounts of each ingredient. Combining the ingredients varies too, some use egg whites and yolks some just yolks. Some require tempering the eggs, some don’t. Most it seems, require scalding milk. Which I’ve learned means heating milk to just before boiling about 183 degrees, and some say between 180-185 degrees.

Baking molds vary too. There you can choose from Copper (very expensive), Aluminum, and then silicone. There are a great number of silicone molds on the market, but the DeBeyers seem to be the favorite in silicone and this is what I chose. Each recipe makes different amounts, some make 10, some make 20 and others make 6. These recipes have to be modified based on the number of molds you have. I did a good deal of math even texting my wife to ask what a fraction of this or that would be. As a side note I wish the US would convert to the metric system, the American system of measuring is just absurd.

Beeswax, most recipes call for this. Not all, but often it’s recommend, and I agree that it adds to the flavor texture and even alters the dynamics of baking. Finding food grade beeswax was not easy. I found on Amazon most people who bought the molds also purchased cosmetic grade beeswax. I didn’t want to do this. I believe there is a distinction. Food grade beeswax should smell sweet like honey. Cosmetic grade beeswax does not. I found some at the local food Co-op, and it smells amazing. They were made in ice cube molds.

How to begin? I chose two recipes like I normally do and take what I like from each. Here is what my first attempt looks like. 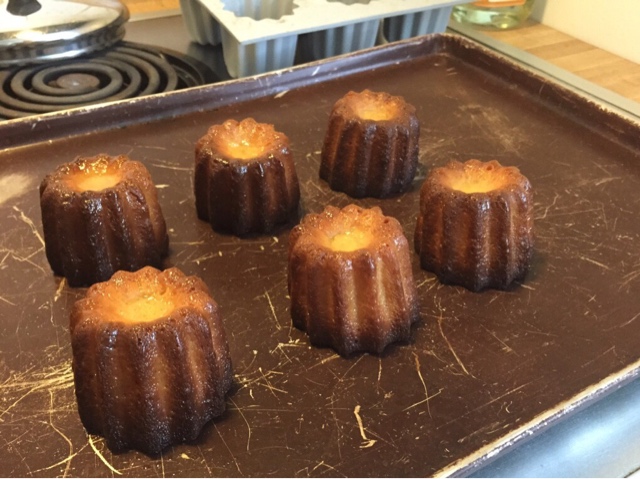 Not too bad for a first try, but the color should be darker, and the inside was more of a solid custardy consistency instead of a more open custard’ey texture and the crust was too thick and hard. In the background you can see the mold, back when it was still in one piece. I ended up cutting the mold apart. When It was in one piece it was floppy and hard to manage for cooking and cleaning. I worked up the nerve and with a pair of scissors cut it into individual pieces. I had seen someone else do this online and I took it one step further but rounding out my cuts. I’m glad I did too, they are much easier to work with and to clean.

This is the first recipe I tried. 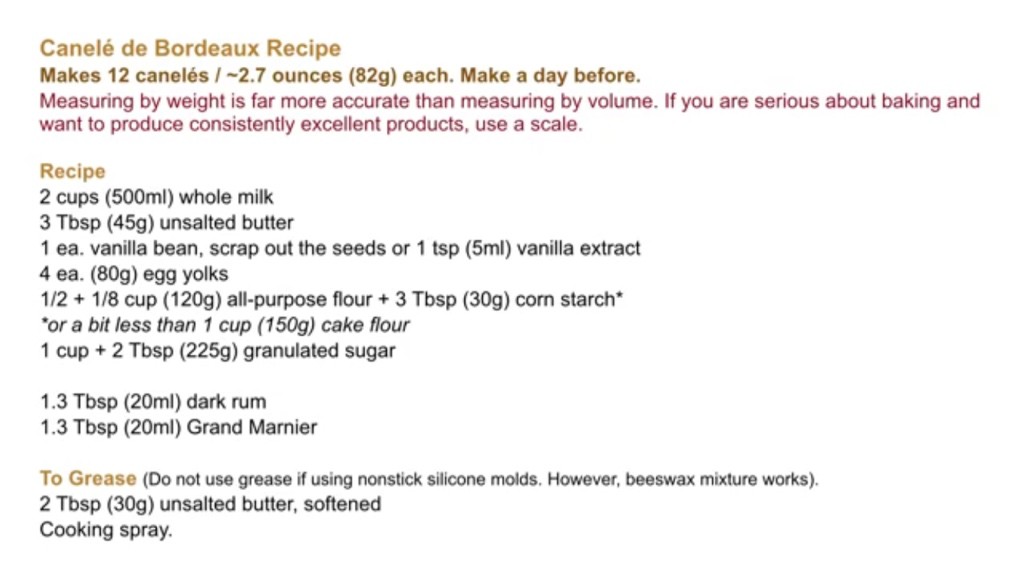 It was from and online cook but the name of Bruno (The Real Deal). I used the baking times and temperatures from this recipe. I didn’t add the Grand Mariner, and I used salted butter. That’s all I had at the time. I also realize now I used 8 year old AP flour.