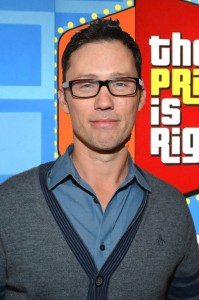 Here it comes! from the Bob Barker Studio, it’s the Price is Right!!

And now here’s your star of the show, Michael Weston!. The stage doors open and no one is there. The audience looks puzzled. The camera pans around and stops to the left side of the stage where you see Michael shoot a glance left and right. He walks to center stage and says, Thanks Sam, Here’s the first item up for bid. Sam:, “A fiber optic camera attachment for the p90 rifle”. This beauty has titanium mounts and will help you with that next.. challenging job.”

Contestants bid and a young college student wins with a bid of $1,200 dollars. The young man is very excited and runs up on stage. He bounds up to Michael with an outstretched hand, Michael gives him a serious stare until he slowly puts his hand away. Looking a little disgusted Michael turns and says would you like to know what you’re playing for?, it’s a new car. The camera pans over to the middle stage door as it opens. Fiona is asleep in the drivers seat. The student starts to get excited again then looks at Michael and quickly calms himself. Michael tells him it’s the punch game and explains in a very serious tone that he has to guess whether the price listed for the five items is higher or lower; for everyone he gets right he’ll receive a punch. If he punches the right spot and pulls out the card that says car he’ll win the new car.

The first item is a cleaning kit for 9mm hand gun. The man guesses higher, he’s right and gets one punch. The second item is cell phone bug, the student guesses lower and also is right and receives a second punch. The third item is a set of hair pins. The man guesses higher and is wrong. Michael looks at him out of the corner of his eye.. The fourth item is a block of C4 the man guesses higher, and he’s wrong. It’s actually a trick question Michael explains since the price of C4 is determined by market value. The last item up for bid is a four pack of blueberry yogurt. The student guesses lower and gets his third and final punch.

Michael walks the student over the punch board and tell the student he has three punches and sets him off on the board. The man punches the first slot and pulls out $100. Michael then stops him before he can take his second shot. He explains that he has made his fist wrong and needs to open up his stance. The student heeding the advice takes his second punch and pulls out $200. Michael praises him and explains that he needs to use his hip in order to get the most effective punch. He tells them man to hold his microphone and demonstrates, then sets him off again on the board. On his final punch the student pulls out a red card that says CAR and wins the car.

The student is now elated and starts running over to the car. The camera pans over to Sam who now has a sniper rifle trained on the student and tell him if he takes one more step it will be his last. The man stops dead in his tracks. Sam says that’s better, you can enjoy it after the show, just make sure you pay the taxes on it! Sam pauses for a moment and says, oh and Fiona, he got the Red card, you better check that car out before we hand it over..The student walks off the stage, Michael turns his eyes twinkle and he shoots a smirk to the crowd.

Jeffrey Donovan in the Price is Right

I’ve launched a Kickstarter campaign to raise funds to manufacture the molds for my invention. Here the link which includes a video demonstration. My project website is db10.net