Okay, so I made another mistake. I got this “Mint Condition” Olympia off of Ebay in It was from Florida and I’m almost positive whoever owned it liked to type at the beach. I also think it was kept in a humid location. The body had rust and pitting. Note that the Splendid version is basically the same machine. 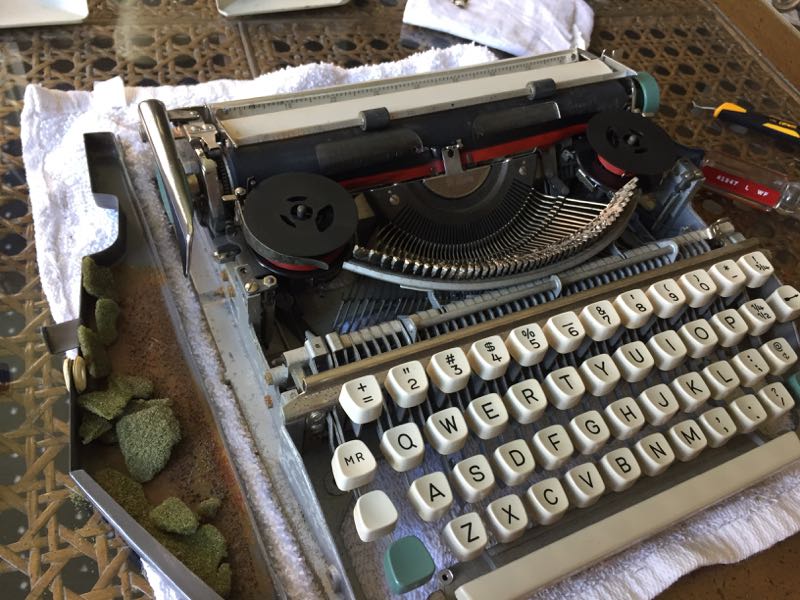 It typed poorly when I got it, it was out of adjustment and was a mess. I think there was sand in it too. Above you can see the rotted foam and the surface rust. The foam disintegrated when I touched it. 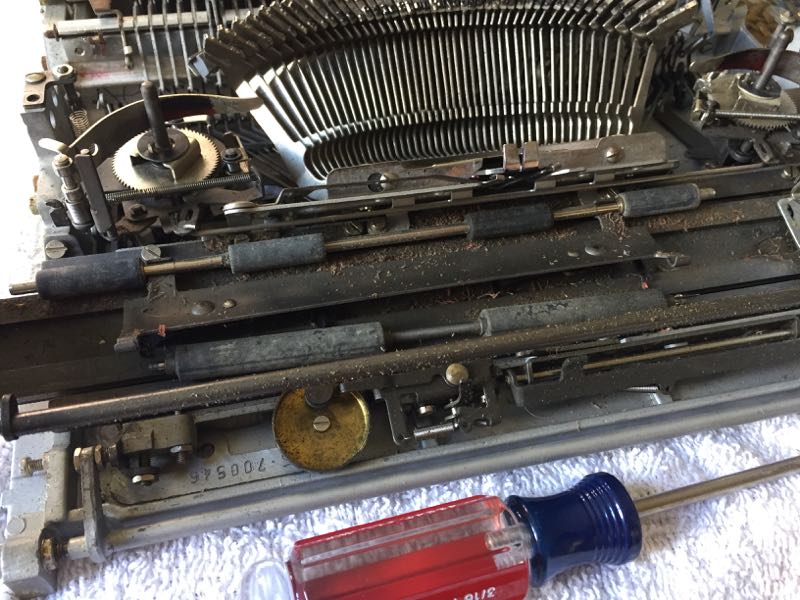 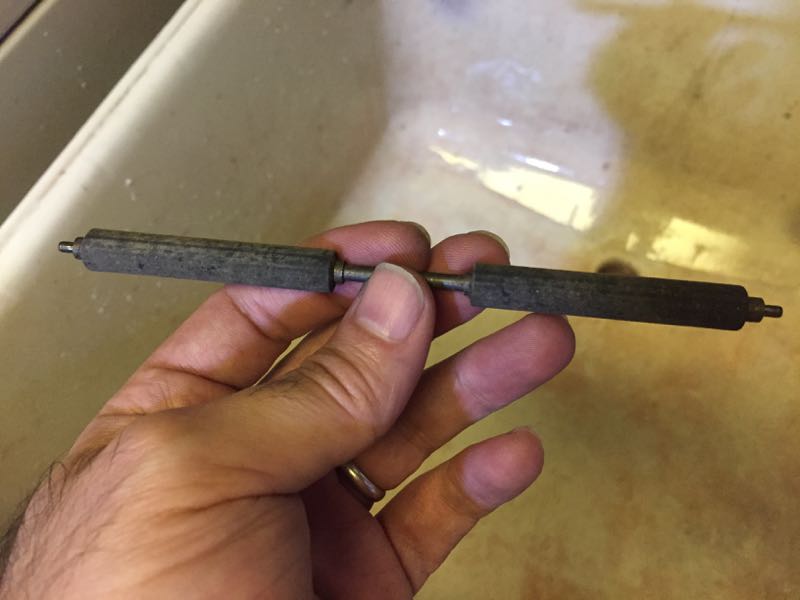 The feed rollers and platen were also a mess. I cleaned them with Bar Keepers Friend and water. Soft scrub also works. 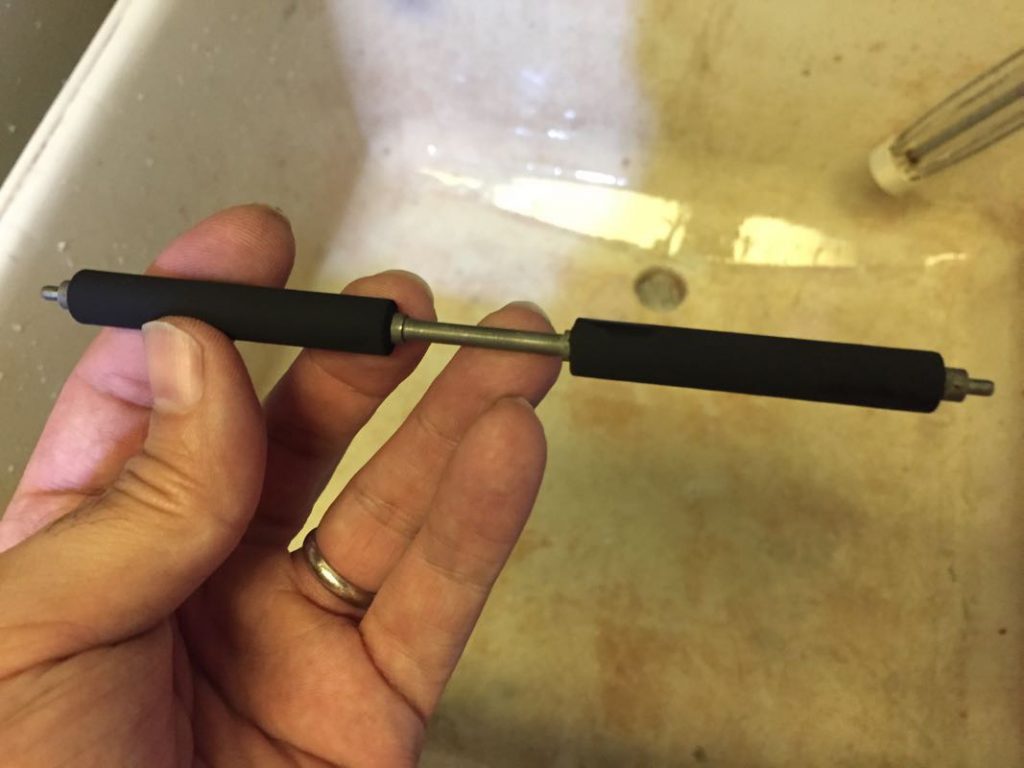 Here is the feed roller after cleaning, it was still soft. 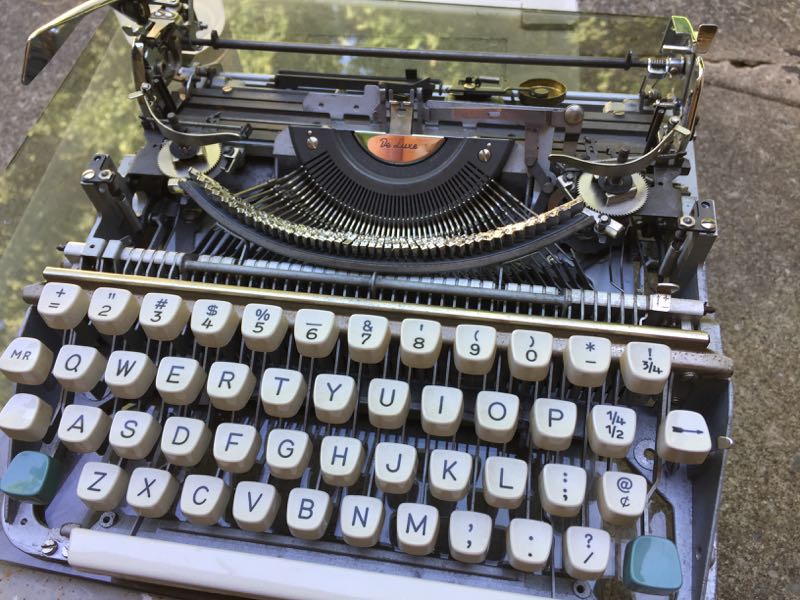 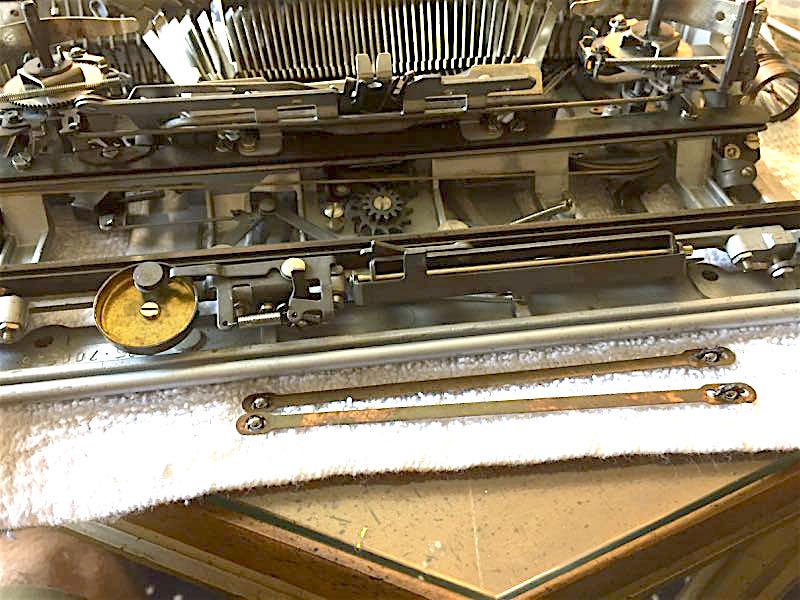 One of the issue was when returning the carriage at the end of a line. It felt kinda sticky, not smooth. It moved in fits and spurts instead of smoothly. Here is a link to a video that shows what it was doing. I didn’t want to, but I had to remove the carriage to get access to the main gear. (see above). I’ve heard horror stories of spurs and bearings falling all over the place when people have removed carriages. The bearings on this are neatly captured in these brass bars. Technically, I didn’t need to remove the carriage, some oil in the right place would have fixed it. But I had to take it apart more than I would have liked in order to learn how it worked. 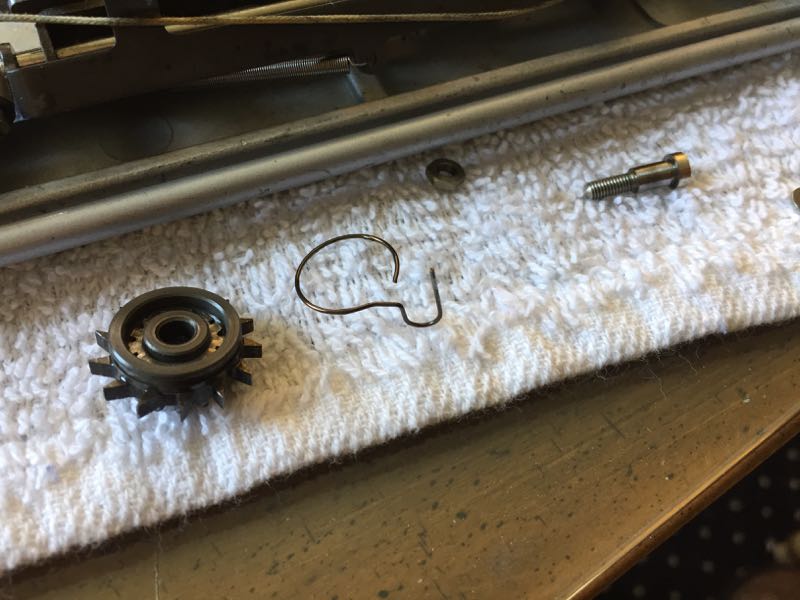 Here is the gear and the culprit, the wire that goes around the gear. I had failed to lubricate it. 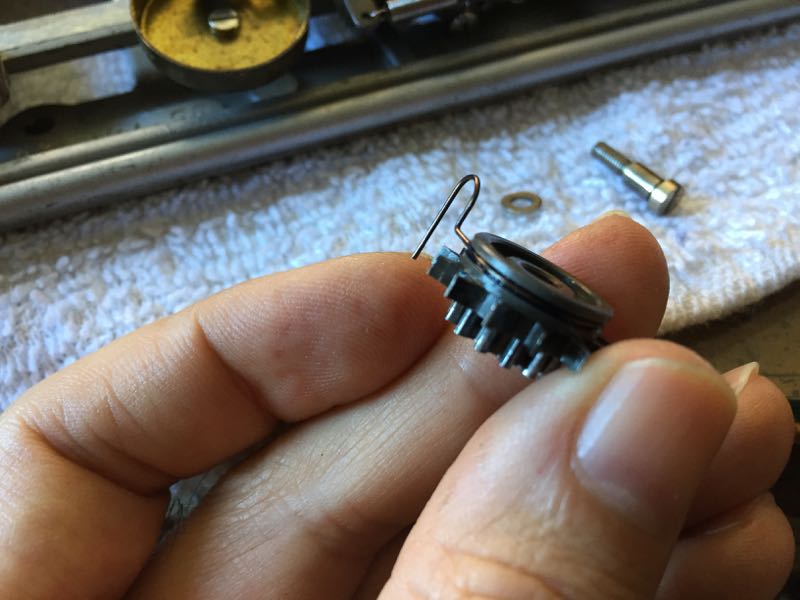 Here you can see how the wire attaches to the gear. I put a combo of grease and light oil in the groove. I actually think it made the mechanism too smooth. Because it relies on a certain amount of friction to engage the carriage release lever.

In this video you can see how the friction of the wire around the gear pushes the release. I think it’s a brilliant design. 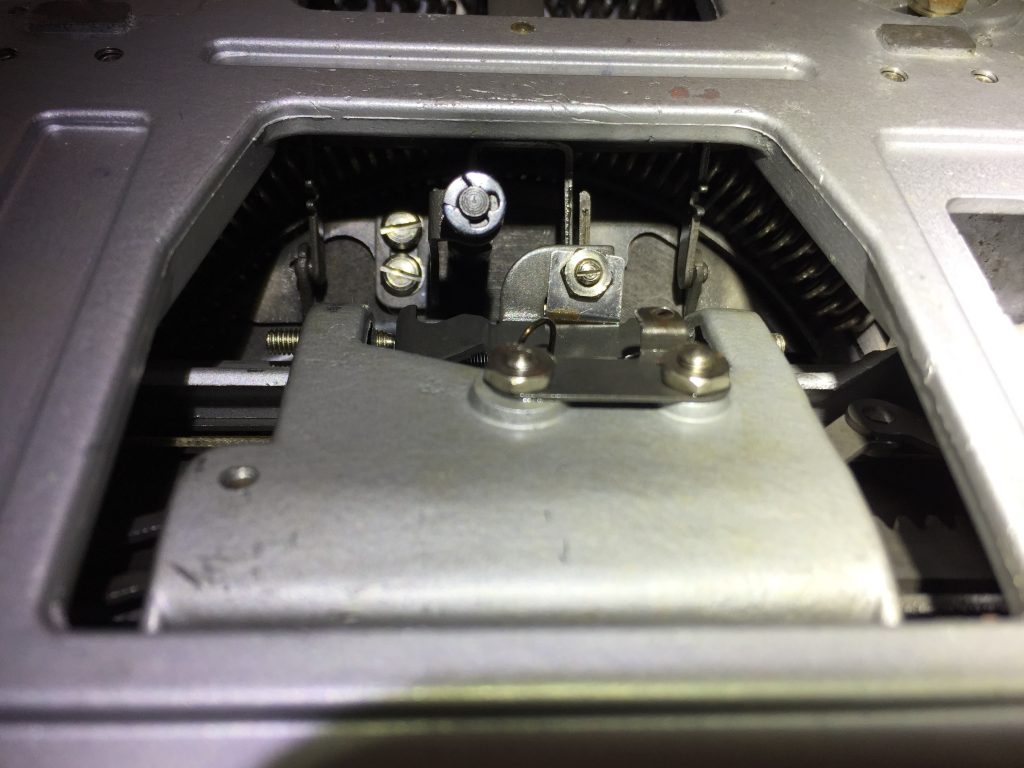 Another issue I didn’t discover until late was the escapement trigger. It adjusts the distance the typebar is from the platen before it triggers escapement. Escapement is just the carriage moving to the next character. It’s the slotted screw in the photo with the hex nut around it. The escapement was too far, it triggered maybe a .5 inch before the typebar hit the platen. I forget the proper distance, but I needed it to trigger closer to the platen. Maybe an 1/4″ to 1/8″. The problem was, when it was too far, the keys didn’t want to make contact with the platen. I had to hit some keys very hard. This photo is the typewriter upside down. 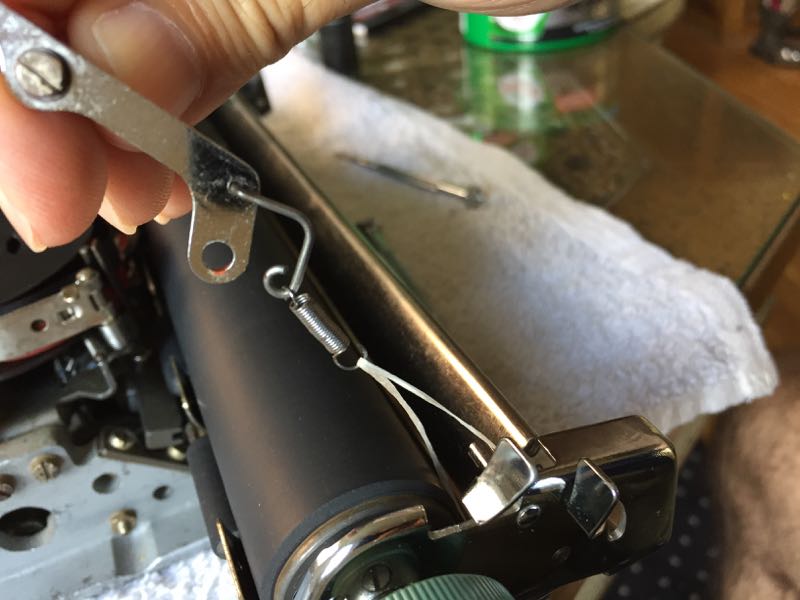 Re-attaching the paper bail spring was a huge pain, until I figured out a trick. I tied a piece of dental floss to the end of the spring. Threaded the floss through the machine and pulled on the floss, stretched the spring and hooked it over the thing. 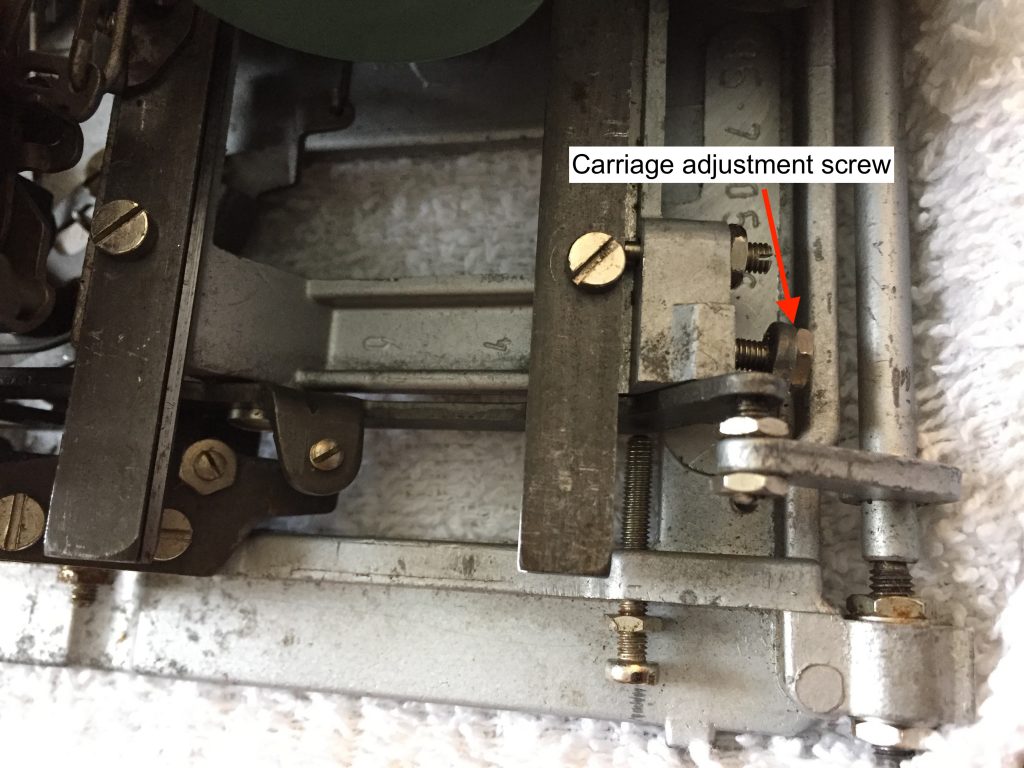 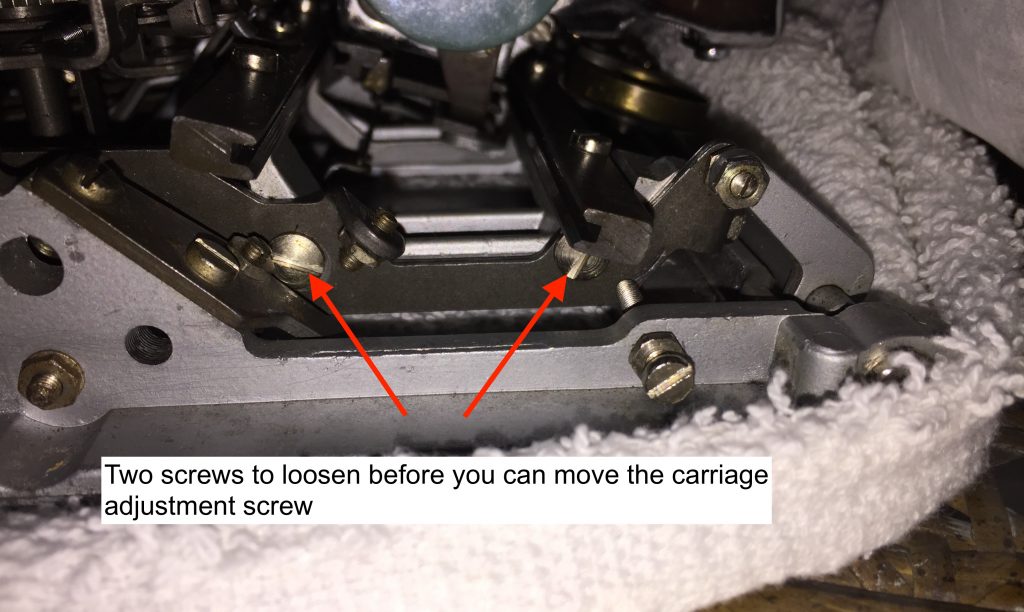 Loosen these two screws on each side of the carriage before adjusting the ring and cylinder adjustment in the previous photo. The screw on the bottom right maybe aligns the carriage left to right. Mine was too tight and it wouldn’t allow the carriage to completely drop back down after pressing shift. 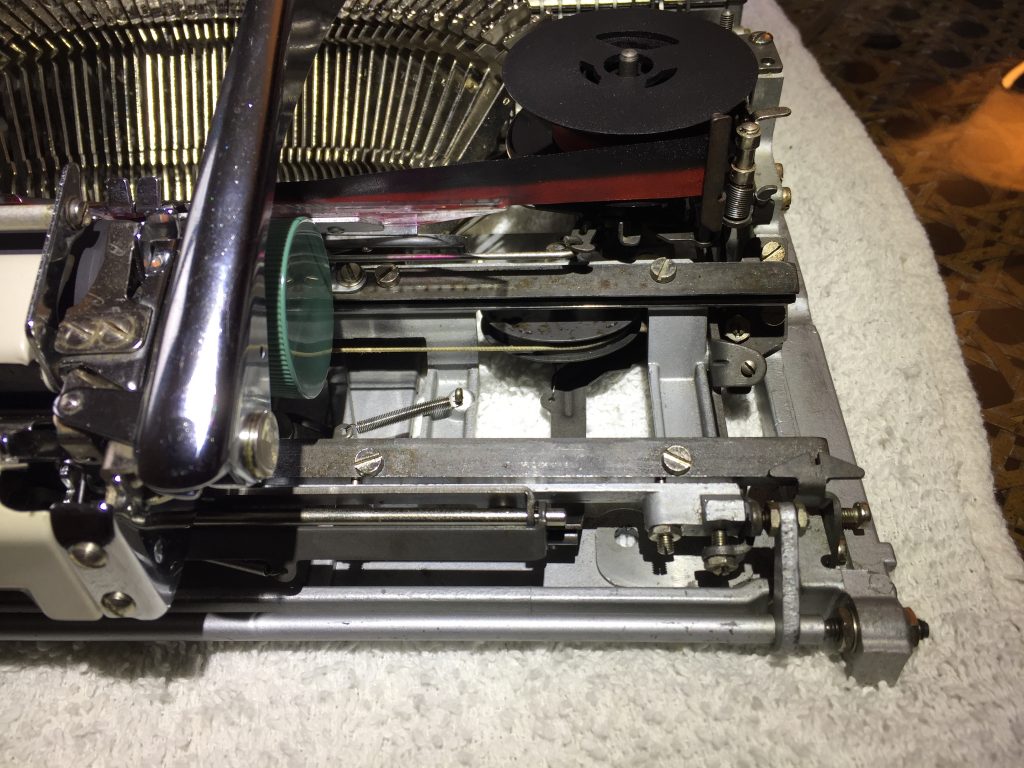 I was soo careful to not loose the tension on the main spring, even when I took the carriage off. I didn’t want to have to rewind it and guess the correct tension. But when trying to re-attach the carriage I lost the tension on the main spring. Uggg… but it was a learning experience and now I know how to rewind a main spring and determine the proper tension. It’s a huge pain and easier if you have three or four hands. 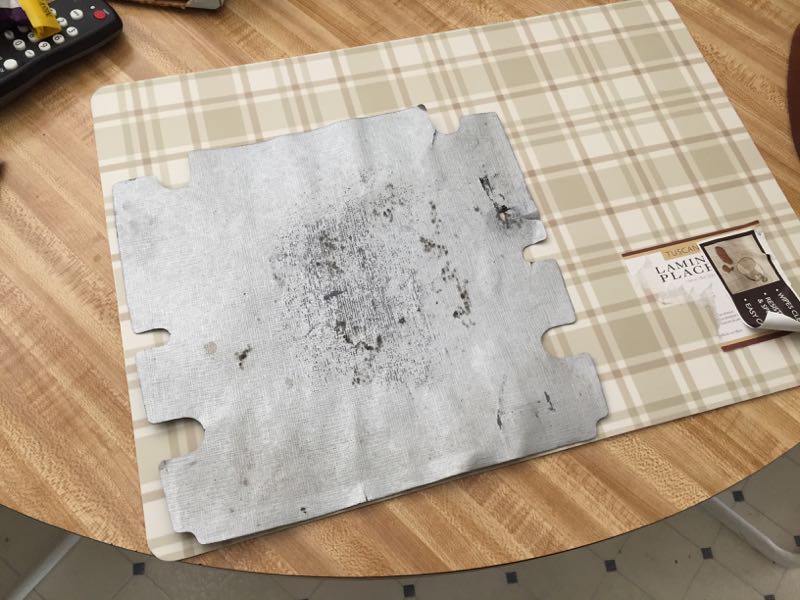 The weird shaped silver thing is mat that’s on the inside bottom of the typewriter. Mine was a mess, I found a placemat at Bed Bath, I traced around the old one to make a template 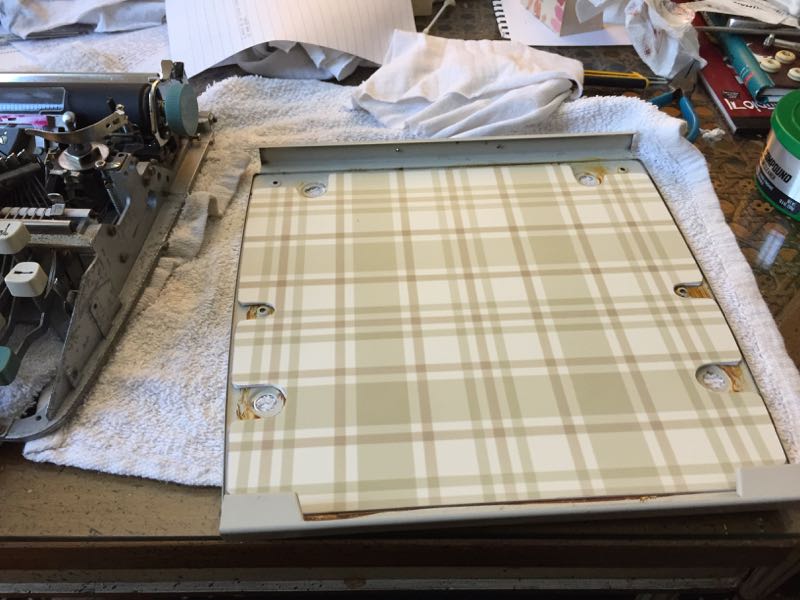 Here’s the new mat. I cleaned up the glue you see around the holes. 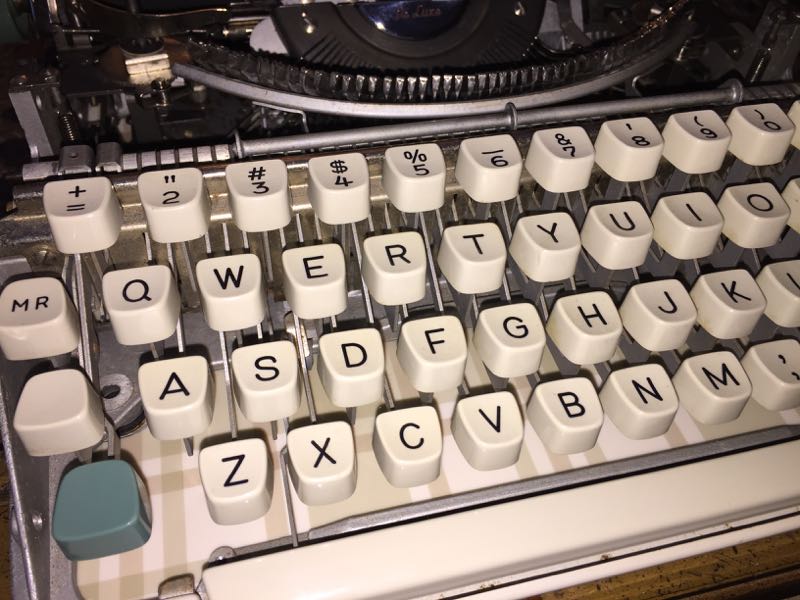 Here it is under the keys. 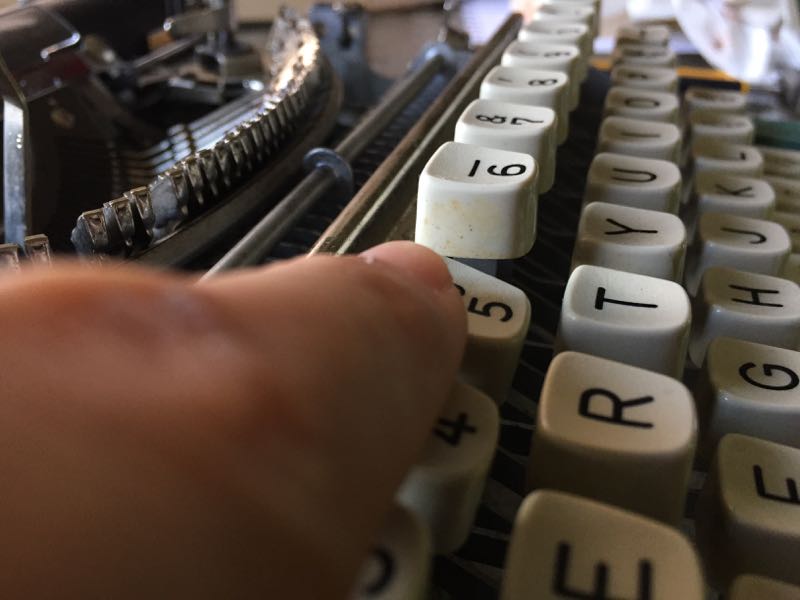 Speaking of the keys, they had crap all around them. I used a slightly damp towel and Turtle wax rubbing compound. A light rubbing removed the dirt. 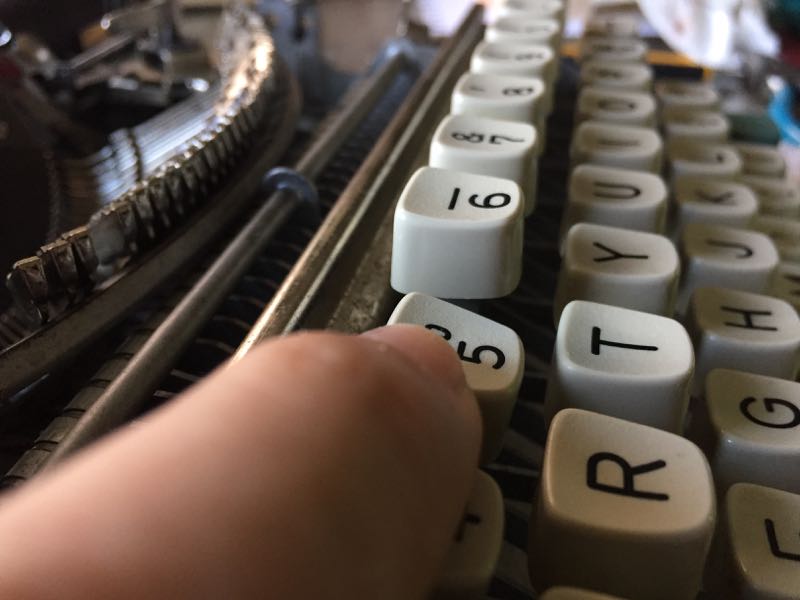 Here is the key after cleaning. 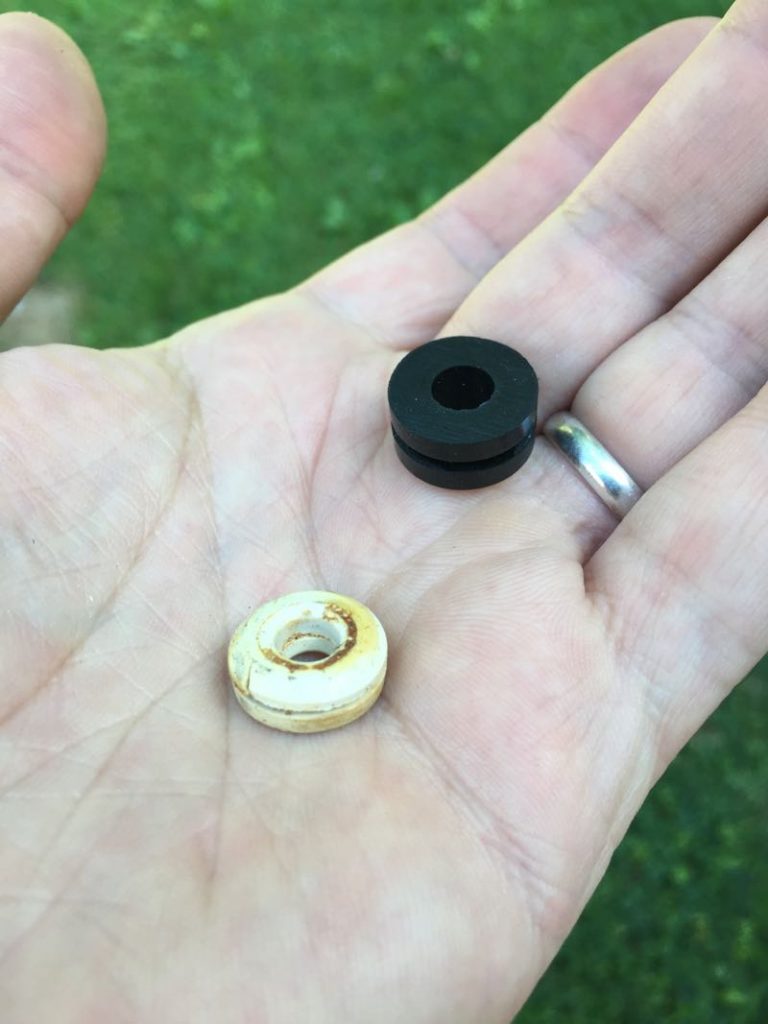 The same white grommets are used to hold the top cover on and act as the feet for the machine. I replaced them with the black ones from Hillman I found at Lowe’s. 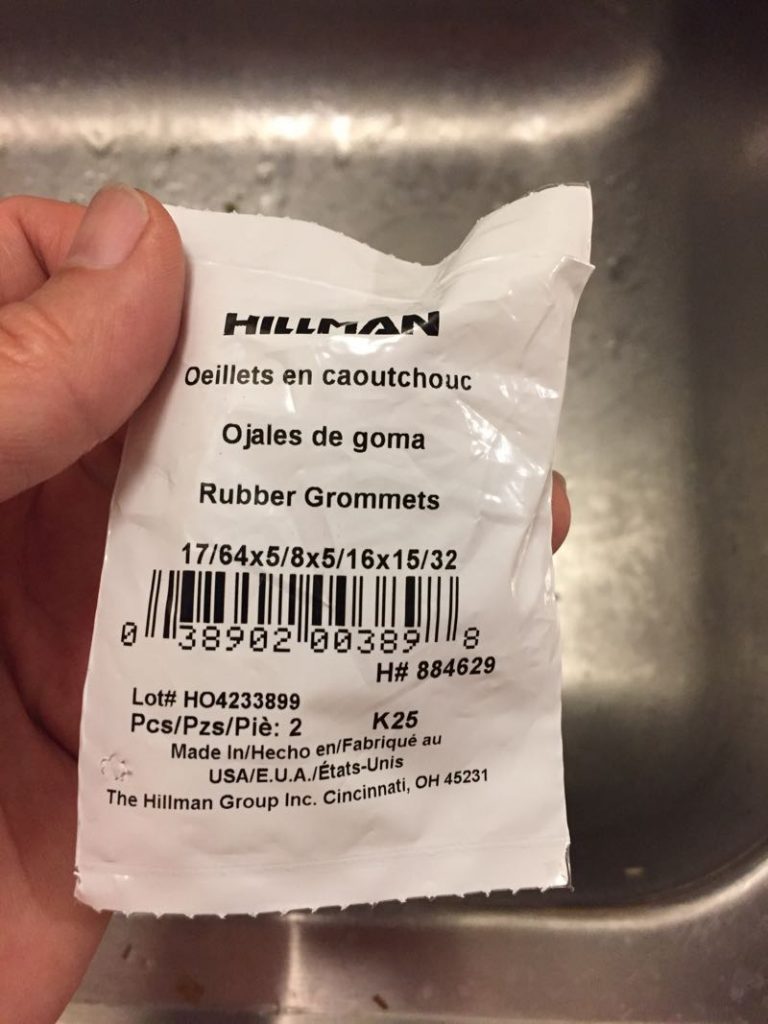 This is the package for the grommets that fit this machine. They fit the top cover and the feet. 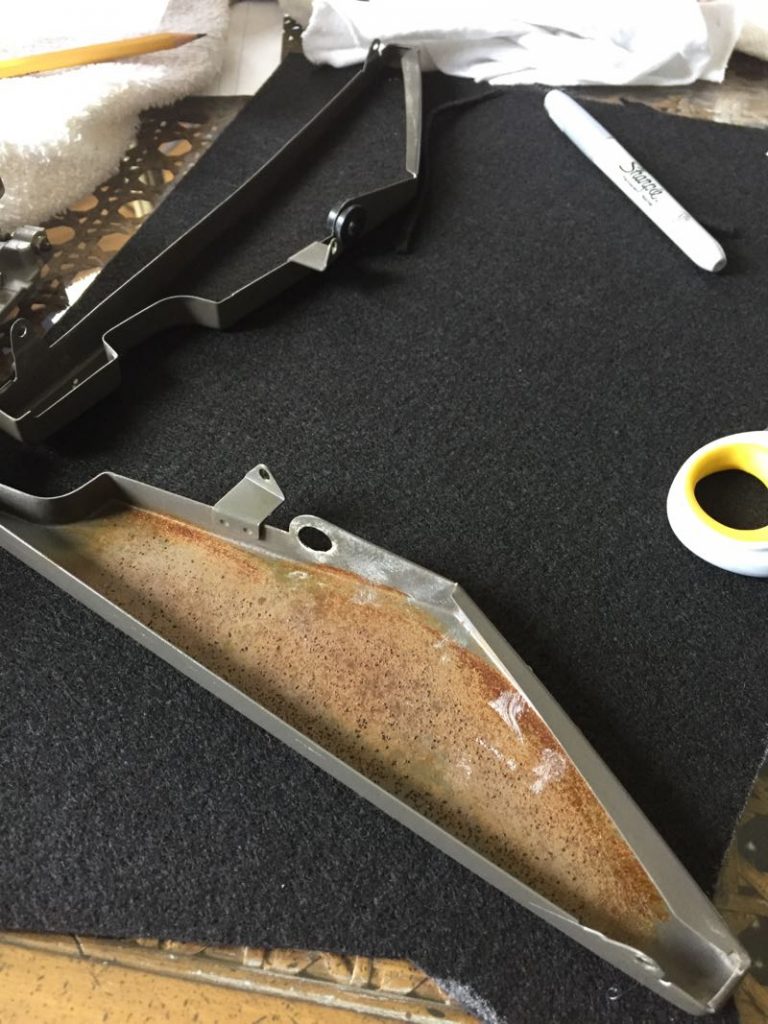 I put new felt inside the body. You can see the top side panel has the felt inside. 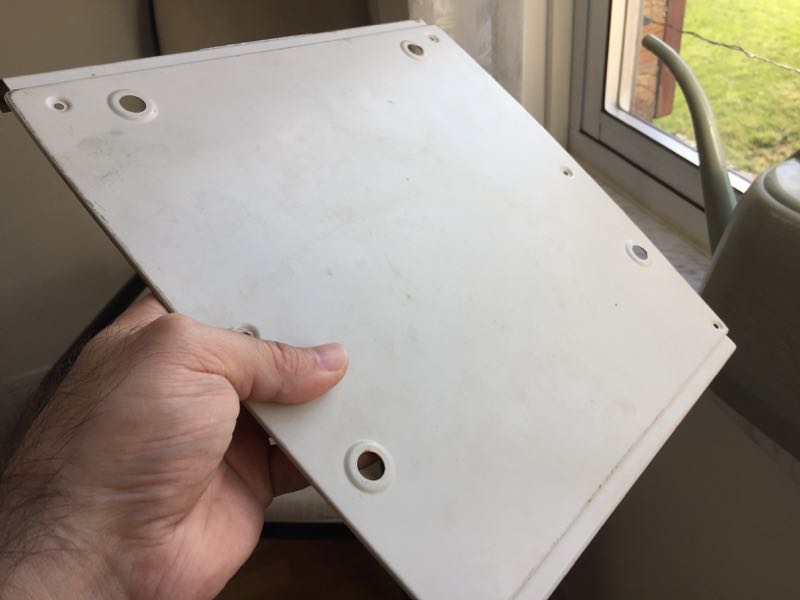 Bottom panel before cleaning. The entire body looked like this. 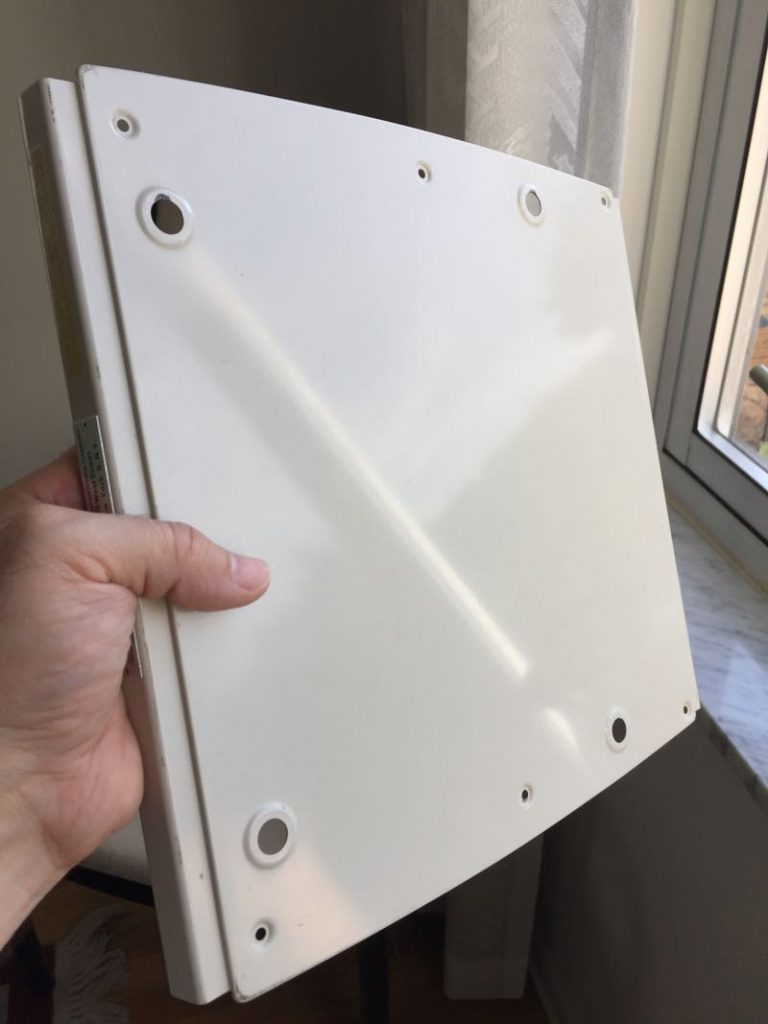 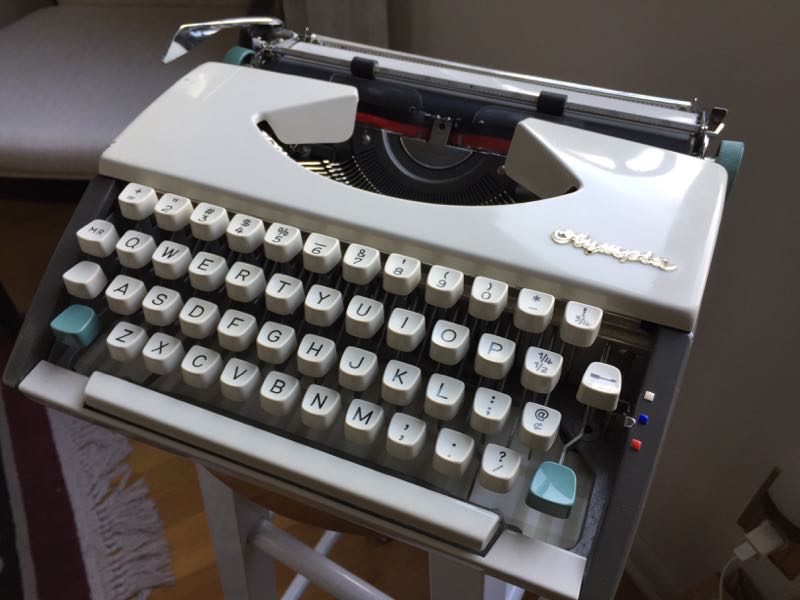 The paint on the body was a mess. I used automotive liquid rubbing compound, then use the polish to finish. I can’t describe how bad the paint looked before cleaning.

Overall the Olympia SF is a great machine. SF stands for Super Flat. It’s very small and easily portable. It’s definitely a great typer. The line spacing adjustments are excellent. On some of my other machines (Underwood & Remington) the distance between the lines of text is larger. You can fit much more type on a page with the Olympia. I think the larger machines have a better typing feel. There is more space inside of them to leverage the key presses for optimal feel.

This is an ultra portable typewriter. Fingers and hands bump into the body when turning knobs, and returning the carriage. This however  is easy to get use to, but coming from a bigger machine it’s immediately noticeable. For some reason this machine feeds the paper very well and very straight. It has a very convenient spring loaded pop up paper rest. For it’s size I’d still say this is a heavy duty, serious typing machine. The engineering is superb. Even after all the years of abuse (I’m pretty sure it was dropped once) and neglect it still types great.